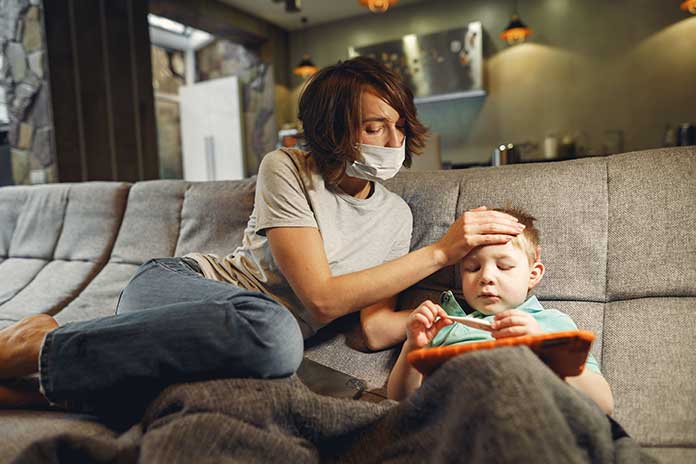 Don’t cover them up too much. Make them drink a lot. Please don’t force them with food. And don’t be worried. If the fever rises, talk to your doctor first.

Due to constant temperature changes, many children find themselves dealing with the flu. And the fever is known, especially if the child is very young; it always creates a lot of anxiety in the parents. But how to intervene in case of high fever? And above all, when is it necessary to seek medical care, and when can fever also be treated naturally? Even the simple remedies of the grandmother are often sufficient to bring down the temperature and make the little one feel better.

What Is Fever, And Why Does It Happen

It is essential to know that fever is not a disease (if anything, a symptom of a disease) but a natural defense of the body, a reaction of the organism to defend itself against infections: the increase in temperature helps to destroy germs. In general, we talk about fever after 37 degrees of body temperature and the need to take drugs only at higher levels and, in any case, after consulting the general practitioner. Never with one’s initiative.

Also Read: How To Promote Healthy Habits For Kids

How To Treat Children’s Fever In A Natural Way

Fever and doctors explain this well, and need to run its course, during which it is worth following helpful advice to treat it in children simply and naturally and avoid their discomfort.

But, despite the reassurances of pediatricians, fever in children is still one of the factors that most frightens and creates anxiety in parents. And it is to help them understand how to behave to manage the fever emergency in children that the National Institute for Health and Care Excellence (NICE) has published guidelines that have focused mainly on the distinction between cases in which fever derives from viral infections that pass on their own without leaving consequences and those in which fever could be considered as the alarm bell of a disease that requires more investigation.

Here are the tips contained in the guidelines on how to treat fever in children :

Do I Have A Sinus Infection? These Symptoms Are Typical

These Seven Mistakes Every Woman Makes When Blow-Drying Her Hair

Healthy Naps - January 14, 2022 0
Bet you make at least one of these hair dryer mistakes regularly? We look so gorgeous after a visit to the hairdresser mainly due to...

Facial Peel For New Skin: Everything You Ever Wanted To Know

Healthy Naps - February 22, 2021 0
How would you erase the few little wrinkles that are starting to appear here and there? Aesthetic medicine today has many options that allow...

Healthy Naps - August 13, 2020 0
Sleeping is essential to get up with a good face and stay fresh all day. But, above all, it is even more important for...

Healthy Naps - February 16, 2021 0
Hair is an integral part of our body; it is the living extension of our being and also a reflection of our general state...