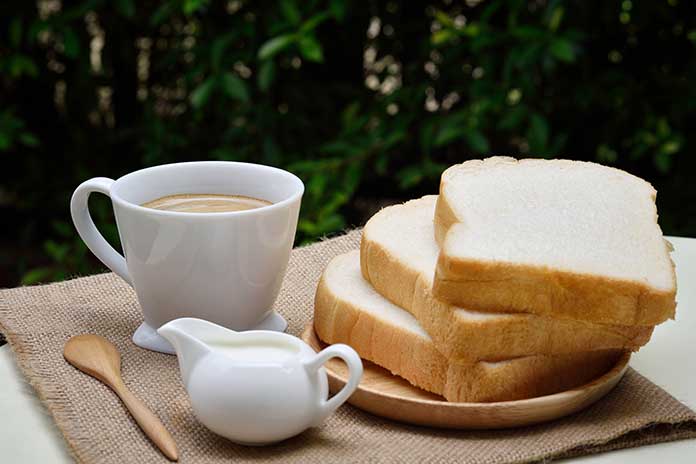 Bread is part of our everyday diet and is one of the most popular foods. At the same time, bread is often labelled as a fattening food. Right? From wholemeal, rye, and spelled bread to toast and white bread: we will give you an overview of the calories in the different types of bread.

Bread is the staple food par excellence in our western world. With its many carbohydrates, bread gives us the energy we need for everyday life. We eat it in the morning at breakfast, in between, or at dinner. No wonder, after all, a lot can be made from a slice of bread: jam, cheese, sausage, lettuce, cucumbers, tomatoes, and many other delicacies go perfectly with or on top of it.

But what about the nutritional value of popular food? How many calories are in bread and rolls? And is what we eat almost daily healthy, or should we change our eating habits?

White bread is mainly made from refined wheat flour, which is how it gets its light colour. Here the whole grain does not find its way into the bread dough, only the peeled grain. Yeast is added to the dough so that the bread rises nicely.

White bread doesn’t have as many calories as you might think – around 200-230 kcal per 100 grams, depending on the variety – but nutritionists repeatedly criticise it. The background to this is, on the one hand, that white bread does without the grain components containing most of the vitamins, minerals, and fibre delivered. On the other hand, it is assumed that the carbohydrates we supply to our body through white bread are also inferior in terms of utilisation. White bread’s carbohydrate is converted to sugar in our bodies, which can contribute to obesity.

In addition, white bread is not very filling: For example, we can eat one slice of baguette after the other without feeling full. In this way, we eat more and thus take in more calories overall.

So: Although white bread has fewer calories than wholemeal bread, our body uses it differently, and our feeling of satiety does not set in at all or only very late. Care should be taken with white flour products such as wheat toast or rolls: On average, they have a whopping 270-330 kcal!

Also Read: Low-Fat Cooking: These Ingenious Tricks Will Save You Loads Of Calories!

Wholemeal Bread: How Many Calories Are In It?

In the case of wholemeal bread, i.e., types of bread made from wholemeal flour, precisely the opposite is true: since the entire grain is processed here, we have more nutrients available that provide power and health.

Vitamin E, B vitamins, iron, zinc, magnesium, proteins, and many other valuable substances ensure that we are optimally supplied with nutrients. The calorie content of wholemeal bread and bread that contains at least a proportion of wholemeal can be higher than that of white bread. The difference, however, is that our body can better convert the carbohydrates we eat from wholemeal bread. While mixed breed has an average of around 250 kcal, wholemeal bread has slightly fewer calories at about 230-250 kcal.

Wholemeal bread is not only healthy, but it also fills you up faster. The result is that, overall, we need to eat less of this bread than white bread to feel complete. In this way, we save calories when eating bread. This effect is reinforced by the fact that wholemeal bread fills you up faster and keeps you full for longer! In contrast to bread made from refined flour, which can soon cause a craving attack again.

Wholemeal bread also positively affects our metabolism due to its high fibre content. Dietary fibre is beneficial for the intestines and prevents cancer in this region.

How many calories are in the different types of bread?

Calorie Trap Bread Toppings: It Also Counts What Goes On The Bread

Of course, with a diet that aims to reduce calories and increase digestibility, it is also essential to pay attention to what you put on your bread. Fatty sausage, tartar sauce, spreadable cheese with double cream, and many other sinful delicacies are certainly not the perfect accompaniment to bread when it comes to saving calories.

If you want to save calories or lose weight, it is better to use lean poultry cuts (chicken or turkey) or low-calorie cheeses. For the sweet spread variant, jam (with reduced sugar content) is better at breakfast than a creamy chocolate spread. It is best to spread your bread with homemade or jam!

Also Read: The 10 Most Delicious Summer Snacks Under 100 Calories