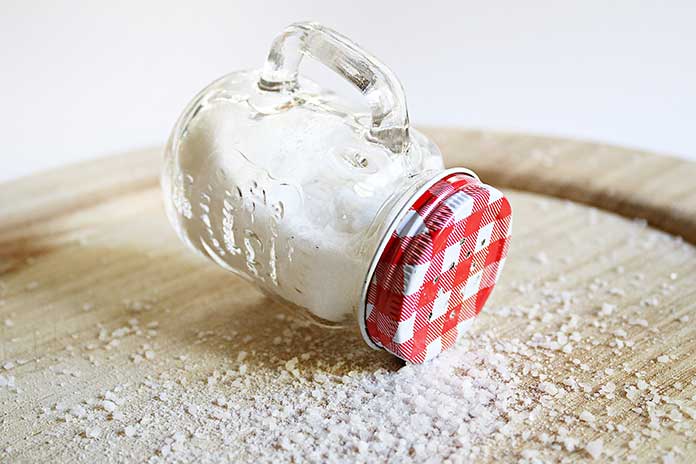 Salt is a widespread mineral on the whole planet, and most of the tissues and liquids belonging to living beings contain some salt. Let’s see the consequences of excessive consumption of the diet. Salt is a compound of sodium chloride (chlorine and sodium) that our body needs, but its high consumption can seriously damage the circulatory system.

In the kitchen, the use of salt is essential but requires some precautions:

It should be known that each gram of salt contains about 0.4 g of sodium; under normal conditions, our body eliminates 0.1 to 0.6 g of sodium daily. High salt consumption can favor the onset of arterial hypertension, especially in predisposed people; it increases the risk for certain diseases of the heart, blood vessels and kidneys, both through the increase in blood pressure and independently of this mechanism. It is the number one enemy of those who suffer from water retention. Sodium retains water inside the tissues, preventing the correct exchange of liquids between the cell and the outside.

Even though some people are genetically predisposed to retain sodium (about 1/3 of hypertensives are), many diets (especially Western ones) tend to provide excessive amounts of sodium. This is due to an alteration in the hydro-saline balance mechanisms, with consequent alteration of blood pressure, acid-base body balance, muscle contraction and nerve transmission. It is also associated with a higher risk of stomach cancer, higher urinary calcium losses, and, therefore, a higher risk of osteoporosis.

Sodium is already naturally present in many foods we consume daily. Reducing sodium intake, so that intake levels are closer to those recommended can help lower blood pressure or delay its onset; let’s remember that with aging, the pressure tends to increase, and it is good, however, to exaggerate the consumption. In addition, a low-sodium diet can help decrease the dosage of antihypertensive drugs, if any. When we talk about salt, we must not think only of what we use to flavor pasta water or to season some foods, such as fries or salads; the salt in foods is much more insidious.

When Shopping At The Supermarket, You Should Stop And Read The Food Composition Of The Food You Buy

On the label, the ingredients in more significant quantities are mentioned first; those in smaller quantities last; the amount of sodium contained is always indicated. It is also important to remember the names of some ingredients that indicate the presence of salt, such as sodium chloride, sodium bicarbonate, monosodium phosphate, monosodium glutamate, sodium nitrate and nitrite and so on.

At the table, it is advisable to add salt only to the pasta cooking water and possibly flavor the dishes with spices and herbs, which can make them equally tasty; recommended white meats (chicken, turkey, rabbit), freshwater fish (trout, pike, carp) or sea fish such as sole, cod, sea bream, red snapper. Avoid animal condiments (butter, lard) and choose extra virgin olive oil. Furthermore, it is better to prefer fresh cheeses to aged ones (gorgonzola, taleggio, Parmesan, mascarpone).

To Stay Healthy, Take These Steps

Also Read: Benefits Of Cilantro And Sea Salt For Health And Skin