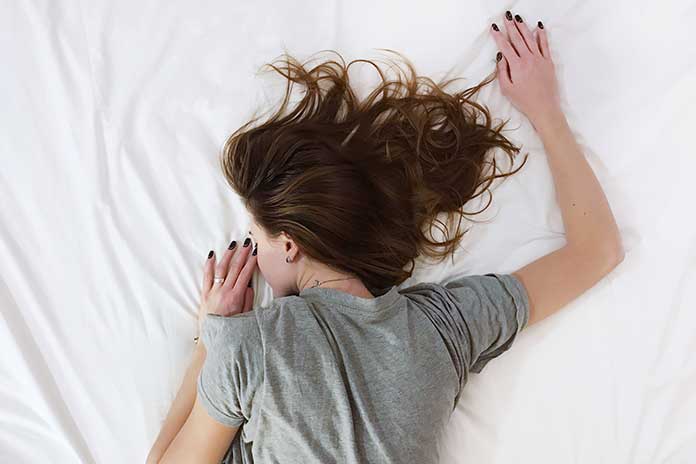 Psychologists explain why we often put off going to bed with better intentions.

While this behavior may seem harmless, if it happens frequently, it can have serious health consequences.

Seven tips from a psychotherapist should help you to get your “bedtime procrastination” under control.

The alarm goes off, and sleep abruptly ends. There are eight hours of paid work, followed by shopping in the supermarket. For dinner there is pasta with ready-made sauce – there is not enough energy for more. Back in bed, tiredness weighs heavily on you. Nevertheless, the laptop is on the bedspread and shows an episode of the favorite sitcom. And then another. And another one. At some point, it will be two o’clock. It wasn’t planned that way.

Floor Kroese has often heard reports like this: people who go to sleep later than they want and the following day don’t know why they decide to do better the next evening and often fail again. These anecdotes prompted the psychologist from the University of Utrecht to examine the phenomenon more closely. In 2014, together with her colleagues, she published the first study and gave the postponement of sleep disease its name: “Bedtime Procrastination.” According to Kroese, whoever goes to bed later than intended, without any external reason for the delay, is, according to Kroese, a “bedtime procrastinator.”

In the years after her study, the postponement of sleep made a name for itself on the internet under the term “Revenge Bedtime Procrastination.” Anna Höcker, psychologist, psychotherapist, coach, and expert in procrastination, can explain the addition “Revenge”: It implicitly assumes that those affected get back in the evening what they were denied during the day – self-determination or enjoyment, for example, in one Structured day due to gainful employment may be neglected.

Also Read: Stress At Work: Here Is How To Avoid It

And according to Floor Kroese, this is also one of the most important reasons for bedtime procrastination: People state that they need time to relax. Another reason is that they lose track of time when they are heavily involved in their evening activity. According to Höcker, this is especially the case with the use of screen media: Visiting social networks, surfing the internet, or watching films are less strenuous activities with short-term reward value and high distraction potential, where time seems to fly by. “That happens, absurdly, especially when we are already tired or stressed from the day or have experienced a lot of frustration – then self-control decreases, and it is more difficult for us to regulate ourselves,” says Höcker.

And although almost everyone should be familiar with situations in which they seek relaxation and forget the time, not all people are equally affected by bedtime procrastination. Researcher Kroese and psychotherapist Höcker agree: Anyone who is generally more prone to procrastination, i.e., postponing tasks, is more prone to such behavior before going to bed. You can test your tendency to procrastinate, for example, with a free online test by the procrastination clinic at the University of Münster.

It is not generally harmful to postpone activities like going to bed. “That would also be illogical,” says Höcker, “because only two percent of all people do not even know how to postpone themselves as behavior.” However, there are different degrees of severity in people prone to general procrastination, explains Höcker: When the procrastination leads to stress or a loss of performance, those affected can seek help from a specialized coach or advisor.

Suppose the procrastination becomes excessive and leads to psychological and physical suffering. In that case, symptoms can be a permanently depressed mood, severe hopelessness, self-devaluation, stomach problems, or sleep disorders – procrastination may have contributed to the development of a mental illness. In this case, it is advisable to see a psychotherapist.

Höcker summarizes the possible consequences: A reduced psychological well-being is possible. Daytime tiredness and exhaustion, irritability, frustration, depressed mood, and negative feelings such as anger about yourself also occur as consequences. Kroese also argues that lack of sleep can lead to difficulty concentrating and severe physical problems such as cardiovascular disease and diabetes.

In addition, according to Höcker, a lack of sleep tends to cause more deficient self-regulation. This can further increase the tendency to procrastinate. At the same time, health behavior declines – the motivation to exercise or eat healthy. “Anyone who is overtired and currently feels that everything is more strenuous will be less able to pull themselves together,” explains Höcker. And not only that: Too little sleep leads to the release of hunger-inducing hormones, so that – given the low self-regulation and increased appetite – overeating or binge eating can occur. Kroese says, “Insufficient sleep can contribute to a variety of health problems, and sufferers are often unaware of this link.”

Also Read: How To Improve The Immune System

Anyone who suffers from bedtime procrastination but does not want to go to a coach or psychotherapist immediately has the opportunity to take a few countermeasures themselves. Psychotherapist Höcker has a few tips ready:

Try To Bring More Freedom And Joy Into Your Day

One reason for bedtime procrastination could be that you are trying to bring back the joy you miss during the day in the evening hours. In this case, you should make an effort to incorporate more of it into the day.

Is it because you go to bed late because you fear the worry that plagues you once you calm down? Then it is helpful to address the underlying conflicts during the day.

Knowing short-term and long-term reasons for the desired behavior change will help you implement them.

Work With Your Biorhythm

Maybe it’s not bedtime procrastination that prevents you from sleeping, but simply your biorhythm? Then you may be able to establish a sleep routine that better suits your personal needs. For this, you should pay close attention to when you get tired and when you have slept to adjust your sleeping habits accordingly.

Work Out An Individual Sleep Routine

Think about a time when you want to be in bed at the latest to get enough sleep. It takes many people seven to nine hours to feel rested. It is helpful to experiment with how much sleep you need. That can vary from person to person.

You manage to go to bed, but then you spend hours in front of your cell phone? Then, at best, don’t even take the smartphone with you into the bedroom.

Think About Resolutions In “If … Then …” Form!

If you didn’t want to do without the cell phone in the bedroom, you could set an alarm clock that reminds you to sleep 30 minutes after going to bed. You formulate the resolution: “When the alarm goes off, I turn off the cell phone and sleep.” With the help of these “If …, then …” resolutions, according to psychological research, behavior changes can be achieved, and new habits can be developed particularly effectively. Alternatively, other rituals are also conceivable: an evening stroll or a cup of tea, for example.

All these tips aim to clarify what function bedtime procrastination has for those affected and then to replace this function. In this way, postponing sleep becomes superfluous. For example, the ringing of the alarm clock could remind you to go to bed after the first episode of your favorite sitcom – and instead of an unintentional series marathon, a night with enough sleep follows.

Also Read: Prostate Problems: How To Identify And Prevent Them?